Did you ever find, as a person of limited years and growth, that the Big Folk talked above your head (literally and metaphorically)? For those of you who have the luck to be parents, did you do that to your Offspringses? I can assure you that Sigoth and I employed such techniques on a regular basis. Life is complicated enough without having to try and explain it to children, especially when you can’t even explain it satisfactorily to yourself.

There are plenty of websites out there if you want to learn about the various differences between dialects in spoken English. In my part of the world there are also numerous books dedicated to trying to interpret Yorkshire dialect for foreigners, such as anyone from London.

In fact I once took a colleague from London to her hotel in York, where she was asked for her passport. She was quite discombobulated. “I’m only from London!” she wailed. The receptionist looked at her sceptically. “It’s true,” I confirmed, “and she’s going back tomorrow.” So they let her in anyway.

But that’s not what I want to talk about today. I wanted to talk about some of those odd phrases adults use when talking to each other. The kinds of phrases that, as a small child, tend to make you stop and say “Whaaat?” and scratch your head.

I’ll go to the foot of our stairs!

This phrase I had never experienced in the actual eardrum until sitting on the top of a double decker bus hurtling down a very steep road in Sheffield. It was in my green and growing youth when I was exploring various universities to decide on courses I might want to study. I was visiting Sheffield, had wandered rather far, and decided to catch a bus back to the railway station. Largely this was because I was lost and a bus with a destination of “Railway Station” seemed a rather neat solution; plus sitting up top meant I got a good view of the city as we travelled.

A couple of middle-aged women came up after me and sat down just behind me. They started chatting about something or other, involving a lot of “She said..so I said” and “Well I never!”. As we started down an especially steep hill, and I gripped the rail in front of me to keep firmly on my seat, as opposed to being pressed like a distressed mime act against the front window pane,  I was delighted to hear one of the women exclaim “Well, I’ll go to the foot of our stairs!”

“Foot of our stairs?” I thought to myself, clutching grimly to the rail, “it’ll be foot of the bloody hill in minute, without the bus!” However, miraculously we made it in one piece, and I found my way safely back to the sunny shires of southern England before midnight, with a richer appreciation of our island’s cultural tapestry.

The translation for anyone unsure is roughly “Goodness me, how very surprising!”

All fur coat and no knickers

My mother used to use this to describe a woman who lived down our street. To be fair the woman in question, who was a very kind lady and free with the distribution of sweets and drinks of orange squash to local children, did often wear her fur coat, even in the summer. As a child I assumed this was because unfortunately she had no knickers and was therefore too cold and/or embarrassed to go out without her coat. I felt very sorry for her and wondered how she could afford the squash and sweets if she couldn’t afford knickers.

Later I learned it really meant she was perceived to be a woman of easy virtue. It certainly explained the variety of people you met coming and going from her house, given that grown men rarely enjoyed sweets and orange squash as devotedly as the rest of us.

Cough up chicken, it’ll be a gold watch next time!

When I was suffering a coughing fit, for whatever reason, my mother would say this.

As a child I was naturally concerned about the possibility. True, some coughs, induced by swallowing the wrong way, could make you feel like you were about to cough up a substantial part of your insides. On the other wrist, so to speak, the option of a gold watch was appealing. I got my first watch once I learned to tell the time in Miss Weatherill’s class (I must have been 5 or 6) so I was very keen on getting a shinier one to flash about in emphasis of my academic superiority. Sadly I have yet to achieve the feat of coughing up an actual gold watch, no matter how hard I hack my lungs. The phrase itself must be from her childhood as my mother still says it dutifully every time she coughs and splutters at us. Still, there’s no such thing as a free lunch.

My family used strange phrases and sayings all the time, but the strangest was one I have never quite got to the bottom of. When I was a grizzly little toddler, having a particularly moany and whingey day, my grandmother would try and cajole me out of my soggy sullenness by saying: 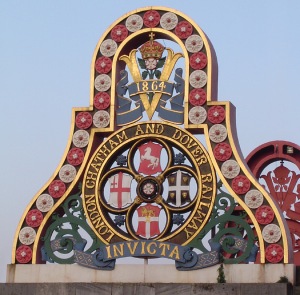 Cheer up for Chatham, Dover’s in sight!

The confusion this provoked was itself sufficient to stop the grizzling. I believe it may refer to an old railway line, the London, Chatham and Dover, but beyond that I can’t tell you any more I’m afraid. I wonder if there’s a connection with hop-picking…

Even my dog wears boots!

Last but not least is a local nugget of wisdom. “Even my dog wears boots” is a legendary, and possibly apocryphal, response made by a builder who carried on working with a fractured ankle. When pressed to go to a doctor or A&E or somewhere of a medical nature because he had fractured his ankle, it is said that this was his answer. Apparently it is intended to indicate that the person in question is so hard that he will not be inconvenienced by such a triviality. That’s Yorkshire Grit, tha knaws. Aye.

Every family has their odd phrases and sayings: I’d love to know yours!