On Saturday I took the train to Leeds to see my female Offspring and spend a day together. I was pleased to do this for a number of reasons: firstly, to spend a day together; secondly, I have not had enough energy to do any such thing for a long time so it was great to be able to even think of doing it; thirdly, Leeds has some marvellous shops and I was looking forward to investigating the markets for wool and Waterstones for books. Inevitably I was mugged by literature but I resisted the overtures of the yarn, enticing and entangling though it was, by reminding myself sternly that I already have at least three bags full of wool (yes sir!) waiting to be knitted up into jumpers. I did compromise and buy a pattern though.

It was the journey itself that stayed in my mind though. I try and listen to music while I am travelling on order to relax and to drown out the wittering that goes on among the other travellers. I really don’t need to hear all about what she said to him or he said to her, or why it’s not fair that stuff happens. On Saturday there was a particularly loud and slightly creepy old bloke across the aisle from me, chatting up young women. He would start off fairly innocuously by asking them where they were going and showing a genial interest, then telling them he was off to see trams somewhere or other, thus appearing harmlessly eccentric. Everyone loves a harmless eccentric. It always ended up with him asking if they liked leather though, which amused everyone concerned. He really was pretty harmless.

So I played my music and turned it up a little and watched the scenery slide by outside. It was bright and sunny, and the stretch of track we were travelling over wound its way through the Howardian Hills and into the Vale of York, then on to Leeds through some rather attractive countryside. Really it’s one of the nicest routes there is. It’s not quite the Ribble Valley Viaduct but it’s a good second, especially around Kirkham Abbey. 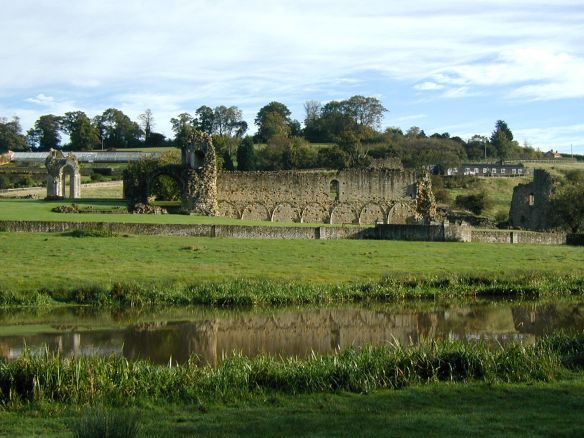 The train runs past Kirkham Abbey between York and Malton

With the music playing it felt like I was in a film, in the establishing shots at the beginning. Here was EBL living in Yorkshire, which looked rather pleasant and had a peaceful background track to make you feel calm and probably to lull you into a false sense of security. I watch too many murderous television programmes to assume we were in for a heart-warming tale of everyday folk. It amused me to work out who in the carriage were the undercover policemen (almost certainly the creepy bloke, but who else?). I thought back to the Due South episode on the train of singing Mounties (All the Queen’s Horses, S2:E14, in case you were interested) and wondered if a handsome young Canadian was about to appear with a guitar and start off a round of “Scarborough Fair”. I hoped he wouldn’t be the one that was killed. Then I hoped I wasn’t either.

Outside the scenery continued unabated. I decided to pay it a bit more attention as no Mounties were forthcoming.

Unabated scenery sans Mounties. This was taken on a sunnier day than Saturday

It was one of those days when the clouds were in layers. Do you know what I mean? There were some that were very low and dark and rather wispy. Just above them was some which were a bit more grey but substantial, then above those there were the big boys, full of rain and menace. There weren’t enough of them to imply definite rain, just enough to suggest it was a strong possibility at some point in the not-too-distant future. I regretted not bringing an umbrella then remembered it was pretty windy and revised my regrets to not bringing my hat.

The layers of cloud made me think of the Earth wearing veils, like Salome, and dancing her dance, not for the head of the Baptist, but for the sheer joy of being a living biosphere in a thinly populated universe. Around the Sun she weaves, inflaming the star to greater heat no doubt, and keeping our home warm and bright and growing. It’s a careful balance she maintains, keeping her orbit in that Goldilocks Zone of not too hot and not too cold, so I hope she finds the joy of the dance is as endless and sustaining as we find the light of the Sun.

By the time the train wheezed into Leeds it was much more dull and chilly outside, and I was already working out which was the nearest good coffee shop to the station. Female Offspring was waiting at the barriers and we set off for coffee, croissants and retail mayhem. The creepy guy was not far behind me, but we lost him in the crowds. I hope he had a good day too.

How was your weekend?