Today I had a day off. I know, I know, I had all last week as well but that’s just the way of it. Today I used it for pottering about with creative projects. I haven’t provided a knitting update for a while either, and I know at least some of you are keen needlefolk.

Without further ado, this is the back of the jumper I am working on. The front is about a third done, and has grown much more quickly now I can see what I am doing after the laser treatment last week. Hurrah again for lasers! 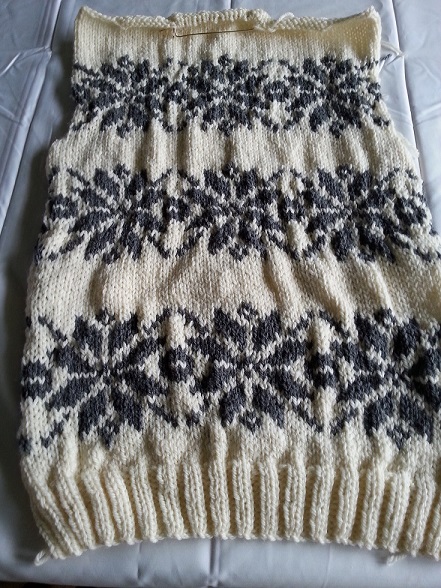 However, this morning I have been trying to puzzle out the script used for Old English. Newer readers may not have cottoned on to the fact that I am trying to learn Old English, that is the language of Alfred the Great and so on. It sounds beautiful and actually I think it looks rather beautiful too. You can see proper pictures on the British Library website, but this is an example from there of the poem “Beowulf”.

Some years ago I did a calligraphy workshop and learned modern uncial. It’s the kind of script that gets used to denote Celtic, whatever that is. Certainly Celtic wasn’t a word used by the people often referred to as Celts. But that’s a rant for another day and today I am feeling too mellow to indulge. I had been practising the uncial (unciallating?) and playing with different inks and paper to see what worked best. The first ink I tried simply soaked into the paper so I got a really splotchy effect.

The lines are from the Battle of Maldon, a poem created to remember an actual battle which was probably the equivalent of the Spartan 300. Basically the local prince faced up to an invading Viking force with far fewer men behind him than he needed, then decided to let the foreigners have the advantage because that was more honourable and got slaughtered for his trouble. I may be being unfair to him, but if you are interested you can look it all up and decide for yourself. Meanwhile these lines were spoken as a rallying call by the prince’s aged retainer to the men after the prince was killed. They are about dying honourably in the face of overwhelming odds (which is of course what happened) and they are the lines that our teacher read to us when I was a mere sprig of a girl and they made me decide I wanted to learn Old English. Roughly translated they mean:

“Our courage shall be the greater, our hearts the stronger, our minds shall be the firmer, as our strength grows less.”

The problem I was having was that the uncial reference sheet I was given did not include the Old English characters for æ (a as in ash), þ (th as in thorn) or ð (th as in eth). Naturally I turned to the British Library to see how your actual Old English People wrote them and realised belatedly that the script was quite different. So then I spent the morning puzzling it out and by lunchtime I managed to produce the lines in something vaguely resembling the original script (with apologies to people who do know much more about this than me – it’s all a learning opportunity!).

And that’s what I did this morning.

How is your day going? If you have returned to work, as most of us must, I hope it was not too traumatic.