I recently changed my working hours so that I now work four long days and have Mondays off. It’s marvellous – although my workday evenings are now compressed into the following: stretch – eat – speak briefly to Sigoth – sleep. Usually I take the Monday to do jobs that need attention, which may be anything from sorting out a bill to (more commonly) catching up on jobs I have agreed to do for my local Quaker meeting. Sigoth also uses Monday for his Quaker jobs and so the days formerly known as “Monday” are now called “Quakerday” in EBL Towers. However, this weekend we spent much of Saturday and Sunday being Quakerly, so this Monday I am taking time out officially to do Leisure.

As a result I can proudly announce that today I shall be mostly knitting with toothpicks.

Well, that’s what it feels like. Youngest Offspring has requested a jumper and so that is what he will receive if it kills me. The one he wants is this one: 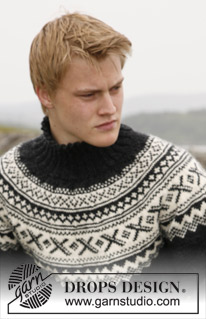 The thing is it requires 3mm double pointed needles for the rib.

Now, I love circular knitting. No seams to sew up. But I am not happy using double pointed needles (DPNs). It’s like wrestling with half an octopus that has porcupine in its family tree, an octopine as it were. It’s scratchy and jabby and catches in my own sleeves and requires my fingers to bend in inhuman directions. Doing such digital gymnastics with the slender 3mm variety feels like a nightmare involving a speed-eating competition at the kind of Chinese restaurant where they won’t give you knives and forks even when you ask nicely and admit you are an inadequate human.

This is what I am working with.

Half an octopine (or possibly a porcupus)

See what I mean?

Now I know that some of you out there will be massively competent at DPN-whispering. I admit I am slightly less likely to twist the first row and produce a Mobius Strip using them instead of a circular needle. I admit they look cool and entitle the user to claim a minimum of + 3 Knitting Ability at a Knitting Master’s Convention. Yet with all that admittedness, it’s still enough to drive a body to crochet, where only one needle is involved; although somehow that’s almost as bad. As George Orwell said, two needles good, four needles (or, alternatively, one) bad.

Suffice it to say I am most keenly anticipating finishing the rib of the second sleeve and bidding the toothpicks farewell.

Do you have this kind of love-hate relationship with your hobbies? After all I am supposed to be doing this for fun, but there are parts of the process (and I find this is true of most of my other hobbies as well) which really make my heart sink.