Lots of people seem to be participating in contests lately so I thought I would join in, But with so many options, which to choose?

Over at the marvellous Knocked Over By A Feather there was the contest beyond ll contests: write a blog based on one of the following Beatles songs:.

Lucy In The Sky With Diamonds

This gets me back to basics – nostalgia. I used to do it better in the old days but such is life. Also Sigoth and I are both Beatles fans. Partly because I remember running around the playground yelling about yellow submarines, and partly because it is the Law.

This is therefore going to be an appropriate story of days of old. It includes life and death struggle, serial killers, fashion, drinking, music and twue twue wuv. It’s about how I met Sigoth, and it’s going to get soppy.

Picture the scene if you will; indeed, if you continue to read, it is a prerequisite.

It is 1980 in Leeds, a city n West Yorkshire with a long and noble history dating back to the medieval wool trade and earlier. That’s about all the wool you will get, but some of us are keen knitters so it had to be mentioned.

As I say, Leeds in 1980. It is October, cold and dark, and the beginning of a new academic year, bringing new and anxious students to university for the first time. They are to be ritually immersed in a proud educational establishment through the medium of Freshers’ Week. I am not sure if this happens elsewhere in the world, but the beginning of term has a pre-study week for new students to help them find their way around, meet new friends, sign up for societies (such as sports, music, politics, issues or general leisure activities), and get very drunk in the company of relative strangers. Somewhere in this heady mix you also pick up your course timetable and possibly start looking for text books. 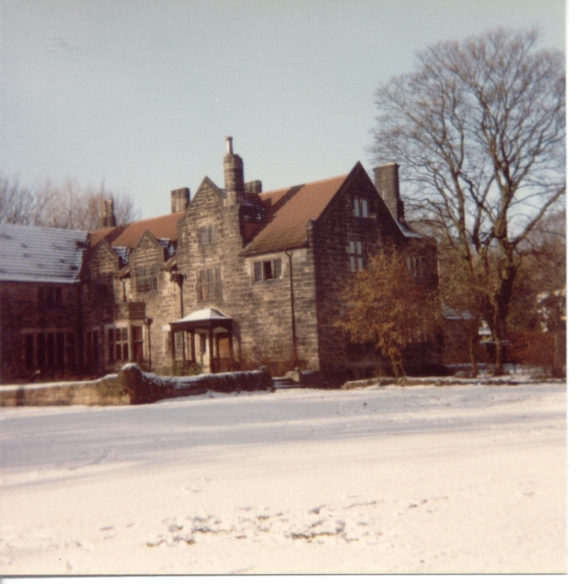 I was living a few miles out of town with a bunch of women in a single sex hall of residence. It is no longer part of the university but at the time it was a great old Victorian lodge which housed about 20 female students. We pretty much all got along very well from the first, and soon were meeting up for sandwiches and introducing each other to new people we had met along the way. In that first week I came across a boy called Sigoth who was in one of the societies a girl from my hall had joined. He looked a bit bemused by everything but gamely tagged along with the raucous mob.

Over the next week I ran into him a couple of times and we nodded to each other and went our separate ways. Then as the courses started picking up I found myself doing lab work on Wednesday afternoons, and regularly caught the same bus back to hall with him as he was doing different labs at the same time, and his hall was on the same bus route. We nodded a bit more but didn’t sit together. We were acquaintances only. I felt sorry for him in the same way I felt sorry for me doing labs late into the afternoon while everyone else was at home drinking hot chocolate and listening to music. He looked cold and sad in the gloom and mist and damp of a November evening.

That winter term was an eventful one in many ways. Firstly we were in the grip of a nightmare known as the Yorkshire Ripper. Although he was eventually caught, at the time he was still very much on the prowl. It was frightening enough arriving in Leeds, away from home for the first time, to be confronted by posters everywhere warning me to look out for a great big old actual murderer. Then a girl was killed just outside the flat where some friends of mine lived. Her body was found by a boy I was going out with (to be clear I wasn’t with him at the time – he lived in those flats too). Initially we were worried a student had been killed; then the police confirmed it was the Ripper and all hell broke loose. At the same time a man started hanging around our hall, and climbing on the roof at nights. The police said he was just after lead, but how to be sure?

I remember you always knew who the journalists were because they were the only ones prepared to be out on their own. The rest of us travelled in packs at all times.

By the end of term tensions were running high. The news was full of shootings: first the Pope and then John Lennon. (Well done, EBL, you’ve got a Beatles reference in at last!)

I had been feeling unwell with a virus caught inevitably from mixing with strangers from all across the country. Students are particularly sickly at this stage. However, it was so bad my room-mate called the doctor and she decided it was meningitis and whisked me off to the Infectious Diseases Unit at Seacroft Hospital. I stayed there five days and was given 2 paracetamol. They took a sample of spinal fluid and decided I was just a whinging student. John Lennon was shot the day I was sent home. 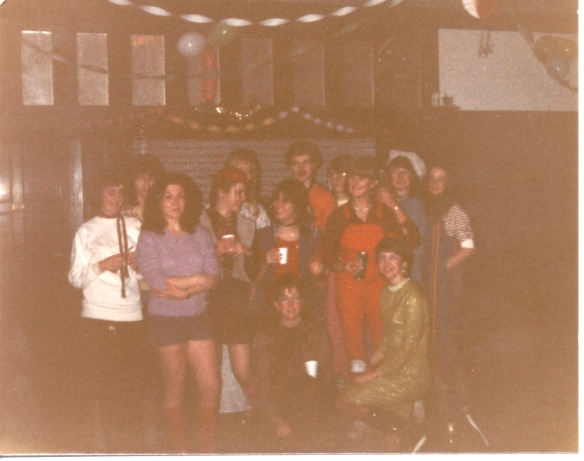 It just so happened that the day I did get home, the rest of the Hall were having a Bad Taste Party. I stepped out of the taxi into a joyous scene, hugs and shrieks of welcome, alcohol in abundance and loud music. The party involved dressing up in anything that was considered bad taste – in my case I just stayed in my horrible dressing gown; others came as John Lennon or Mark Chapman. What jolly japes!

Naturally I had too much cheap booze and then discovered Sigoth also weaving unsteadily along the hallway to the kitchen. We sat down and started talking, mainly about John Lennon and life, the universe and everything. To be honest I can’t really remember what we talked about (apart from John Lennon, because that was all anyone talked about that evening) but it was deep and meaningful because we were tipsy. We spent the night together, and in the morning Sigoth found my guitar in the corner and started to play Beatles songs on it. He knew loads of them; he even sang me “Dear Prudence” but substituted my name instead. It was gloriously romantic for a shy, innocent 18 year old. (That was me, in case you are wondering.)

And ever since, to tie in with KOBAF’s contest, because apparently there are rules and stuff, he has had all my loving: when we were apart during university vacations; when we each went off to gatherings and trips without the other; when work or illness or external crises separated us; and every day we wake up together too.

Every day I am grateful for my luck. 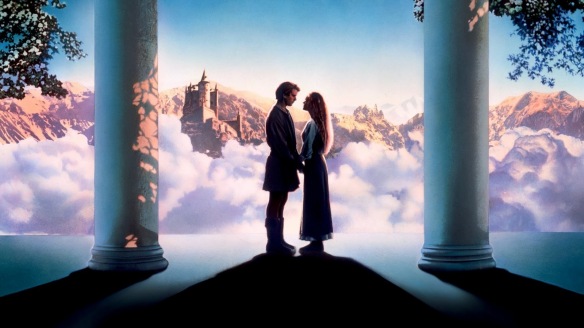 I finally received an appointment for the second cataract operation.

Previously on ElectronicBagLady’s Blog….In case you don’t recall, or missed the first one, I am between operations to replace the lenses in my eyes. I don’t have fully formed cataracts yet, but I am myopic (“pathological myopia”, they told me) to an extreme level, so much so that the optician can no longer correct the problem fully. So they are giving me new plastic lenses in the eyes which should correct the vision and also prevent the further development of cataracts (they are beginning to form). The first operation in October was very successful but in the interim I have been suffering headaches and vertigo and nausea from having one eye very slightly long sighted, and the other so short sighted it’s almost looking behind me. And now the story continues…

There was a great deal of fuss involved in sorting out how to get to and from the hospital (not that easy from where I live), arranging the pre-op assessment (again a whole day to get there and back for a five minute MRSA swab – annoying but necessary) and many colleagues to calm down because it will be a week before Project Go Live and about 24 hours after I sign off Go Live, assuming that I do, in fact, sign off Go Live.

Well, that was all gobbledegook, wasn’t it? In English then, I will be going in for an operation at a Very Awkward Moment for everyone at work. However, being a Project Manager of some competence, I had recorded the possibility in the Risk Log and we all had agreed what to do if it happened (which is what a risk is). So there was no excuse when I held everyone to account, looked them in the eye down the phone line and said, “So you know what to do, right?”

Bless their hearts, they did. After the initial shock everyone admitted they might be able to manage, which soothed my ego nicely. I am sure they are cheering really because I have been so neurotic over the last few weeks they will be glad to get rid of me. The other item in our favour was that we finally signed off the documentation yesterday, by which I mean the planning documents, policies, joint procedures and so on, and have more or less finished running the Disaster Scenario tests.

Oh my dears, I will be so pleased to have this operation over. I hope the second eye will be as successful as the first (although it’s a different surgeon so I am a little nervous). They had said the wait would be 6-10 weeks, and that was a few months ago. God bless the NHS and all who sail in her, but they are lousy at timing, although in this case it has worked out better for my work life, even if it has meant a period of nausea and vertigo which was longer than hoped.

I don’t really have much to say tonight; I just wanted to share with you about the operation, and to say I am not sure if I will be able to see well enough to post for a while. If I do, I pray you will indulge the many typing errors (as opposed to the hopefully lower number that slip through during normal service).

I can’t touch-type. I wish I could now, but when I was more nimble pf brain and finger, my school took the attitude that we girls should not learn to type because that was what less academic girls did in order to become typists. We were destined to do greater things, attend university and marry well so we could entertain our husband’s business colleagues amusingly and intelligently. That was why girls went to university, don’cha know?

It didn’t work out. I fear I have let Sigoth down terribly. I am most ashamed. If he ever brought captains of industry home for supper, I shudder to think what would happen. Much would depend on their conversational ability, and the level of casual –ism of choice (racism, sexism, homophobia, which is an –ism really, or their position on hanging, which will have some –isms attached somewhere, probably by a reef knot).

On the other hand, if I bring home strays from work, as I used to do back in the day when we didn’t live in Ultima Thule, Sigoth can whip up demon veggie lasagne and we have a right good laugh. Even that time I invited my boss, we forgot he was coming and ate everything before he arrived. He enjoyed his Indian takeaway very much though so I think we got away with it.

Devote at least one post a month to/for/about peace.