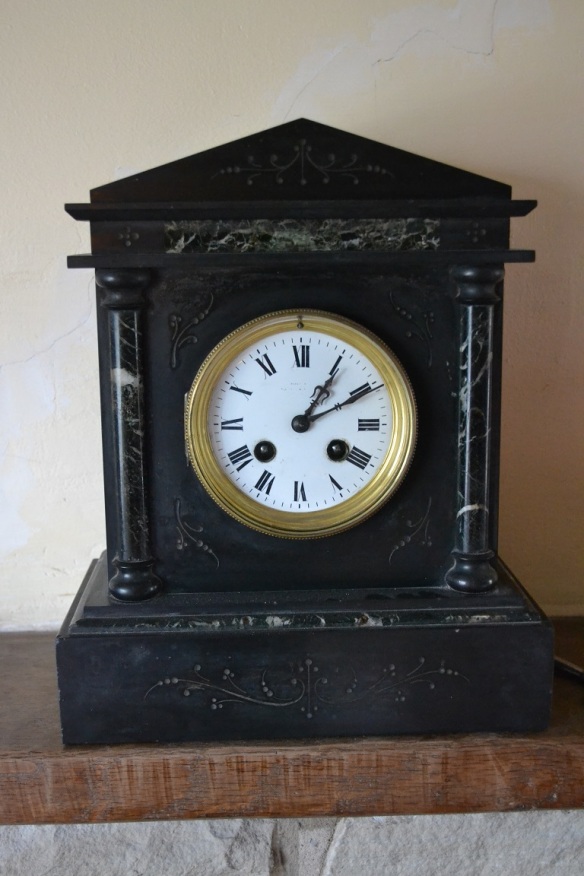 The other day I decided I needed to start a project I had had in mind for a while: cataloguing the various “heirlooms” from my family. I suppose writing about de-cluttering the other day has been an additional kick up the backside. Today I made a small start, and the most important item among those photographed was, of course, Grandma’s clock.

What better way to kill two birds with one stone than to write it up and turn it into a riveting online read. I know you are all absolutely desperate to know more about it.

When I was little I loved to sit and watch Grandma comb her hair. When I studied German as a teenager I completely understood the Lorelei, who sat and combed her hair, luring sailors to their doom on the Rhine. I could identify with the men who became entranced; it was like that, watching Grandma. Her hair never went grey apart from a little stripe at the front. The rest was auburn, and fell to her waist when she let it down from its cage of pins.

My grandmother lived with us, so she was very important to me. She read me stories and showed me how to make jam, and always loved my pictures, no matter how awful they were. Mostly I sat with her downstairs in the old battered leather armchair with the horsehair stuffing poking out of the seams, and we read books and drew pictures. Sometimes she got a little muddled and called me “Win”, thinking I was her dead daughter. In my thoughtless way I’d say “No Grandma, I’m not Winnie, she died!”. Way to go, EBL.

Less often I would go up to the bedroom and sit with her. Those occasions felt more special. Her bedroom was definitely hers alone, whereas downstairs everyone was in and out. She had all sorts of her treasures in there, and I liked to play with the jars on her dressing table, laying out the hairpins in patterns and sorting them into sizes. I was that kind of child. Her dressing table also boasted photos in sepia of more dead people, her brothers killed in the trenches of France, and her clock.

“I don’t wind up the chime,” she said a little sadly, “because it’s too noisy for other people.” She meant my parents. “It’s a lovely chime though.”

So of course I wanted to hear it, and so she wound it up just one turn and we listened to it ring. It was pretty and I wanted it to ring all the time, but she shook her head. It wasn’t like my grandmother to be quiet if she wanted something, so I suspect that the chimes also brought back memories she preferred to stifle. I was being allowed a rare glimpse, and I took the crumbs.

She told me about different clock chimes and sang them to me, and we went through “Oranges and Lemons”. She told me about old London churches too, being as she was a Londoner. Then she sang “Maybe it’s because I’m a Londoner” as well. I sang it too.

“You’re not a Londoner though,” she said. “You weren’t born in London.”

It was like that bit in Last of the Mohicans, where Chingachgook says he is the last of his people and Hawkeye’s heart breaks. Well, my heart didn’t quite break, but it hurt, even though she was quite right. I was born in the Royal County of Berkshire.

When Grandma died my parents couldn’t find the key for the clock. It must have been caught up with the things that were thrown away. I insisted on keeping the clock though. It was 35 years before I found someone willing to clean it up and get it going, and now it sits on our mantelpiece and chimes irritatingly over the top of the television, usually at that bit right at the end when there’s a cliffhanger for next week’s show.

The man who fixed it for us stripped it right down and built it up again. Grandma had told me that her clock was a wedding present. I wish I had asked from whom, because it turns out that the clock is older than I thought. Grandma was married in 1910 but the clock apparently dates back to 1860. I assume it was a hand-me-down but I can’t quite work out who would have had it originally. It’s not particularly valuable; these clocks were quite common I understand, and I have seen several similar ones, although nothing exactly like it. Her own parents were married in 1877, so it was unlikely to be theirs except as another hand-me-down. My grandfather was illegitimate. The previous generations married in the 1850s so a little too early. It’s the typical genealogical conundrum, with endless possibilities and no chance of an answer. Don’t try family tree unless you are comfortable with uncertainty!

Anyway, that’s the tale of Grandma’s clock. It’s a big old alabaster Victorian monstrosity and I love it. When it chimes, she is with me still, combing her beautiful, long, auburn hair.

What objects hold memories for you?